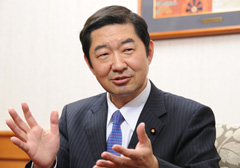 In his interview, Sato spoke on the government's decision of March 1, 2013, approving the manufacture and export of parts by Japanese companies for the F-35 fighter, which Japan's Air Self Defense Force (ASDF) will also be purchasing. While describing the so-called "three principles restricting the exports of weapons"-which Japan adopted in 1967 prohibiting arms sales to communist countries, sales to countries which the United Nations has prohibited, and to countries involved in armed conflict-as a defining national policy of Japan, Sato also noted that there have been valid exemptions to the policy over the years.

The Japanese government's latest decision to take part in the production of F-35 parts, Sato explained, does not infringe either the spirit or letter of the weapons export ban and belongs to the category of exemptions approved of in the past. He also defended the procurement of the F-35 itself, noting that the radar-defeating "stealth" jet-which the U.S. and eight other countries were co-developing-would play a vital role in Japan's national security as other countries in the region have also begun to introduce similar "fifth-generation" fighter-aircraft.

As to why Japanese aerospace firms were allowed to participate in the manufacture of the jet's parts, Sato cited the Autonomic Logistics Global Sustainment (AGLS) regime, which enables countries to participate in the F-35 supply chain, thereby optimizing the availability and cost of components. He added that by taking part in the AGLS system, the ASDF could not only repair and maintain the fighter in Japan, but also service U.S. Air Force units deployed in Japan as well, helping to fortify bilateral security ties.

Some critics, however, claim that Japanese parts, under the AGLS system, could theoretically be provided to Israel, which could engage in an armed conflict war with her Arab neighbors, thus constituting a violation of the ban on Japanese weapons exports. Sato rejected this argument on the following grounds: First, the system falls under the unified administration of the U.S. government, which is prohibited from providing parts for use other than that specified and agreed to by all user-parties of the F-35. Second, if parts are to be transferred, they can only be provided to countries abiding by the United Nations Charter for the preservation of international peace and safety. Thus, while Israel can still be recipient of Japanese-made parts, it can do so as long as it is not engaged in activities violating the UN Charter.