TPP participation must be based on sound national strategy 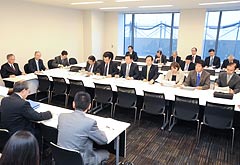 Participation in the Trans-Pacific Partnership, a multinational free-trade framework that would mandate the lifting of all import tariffs, is accelerating. While New Komeito is not opposed to the TPP in principle, we believe national discussion is necessary to ensure that policy initiatives are developed to fortify the domestic agricultural sector and other vulnerable industries from the expected flood of imports.

The TPP concept was first adopted by New Zealand, Singapore, Brunei and Chile in 2006 with the goal of establishing a free-trade zone that includes all industrial and agricultural products and financial services by 2015. The number of signatories has now reached nine, with the United States and Australia expected to follow suit in 2011. TPP differs from such bilateral frameworks as the Economic Partnership Agreement and Free-Trade Agreement in that the latter two allow for certain tariffs, making them relatively easier to protect weaker industries.

For Japan, TPP participation is either quite beneficial or dangerous, depending on who's doing the extrapolation. The Cabinet Office, for one, believes GDP should increase as much as 3.2 trillion yen, while the Ministry of Economy, Trade and Industry projects that if Japan does not participate, then GDP stands to decline 10.5 trillion yen by 2020. Among the hardest hit, according to METI, will be the core Japanese export drivers-the industries that manufacture motor vehicles, industrial machinery and electronics products.

The Ministry of Agriculture, Forestry and Fisheries naturally begs to differ. It estimates that 90% of Japan's rice market will quickly cede to cheaper foreign imports (if priced at 75% less than domestic brands) and that farmers stand lose more than 1.9 trillion yen in the process. The assessment for other agricultural products, including dairy and meat, is equally grim.

In response to the manifold challenges posed by the TPP, New Komeito has established a task force to evaluate the issue from a broad perspective. It will be studying South Korea, which is a TPP signatory, for the initiatives it has adopted to protect South Korea's agricultural sector.

However, New Komeito Policy Research Council chair Keiichi Ishii recently expressed frustration over the dearth of serious discussion on the TPP issue, especially that relevant to a national strategy dealing with initiatives that would make weaker domestic industries more competitive in global markets. "I just don't see the ruling coalition or the ministries engaged in such discussions," he told public TV broadcaster NHK on October 31. He added that participating in TPP simply because Japan is the host-nation of the 2010 APEC conference was "foolhardy."