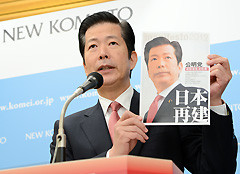 November 18, 2012: New Komeito Chief Representative Natsuo Yamaguchi held a press conference at the party headquarters in Shinjuku, Tokyo, on Saturday, November 17, to introduce the New Komeito manifesto, which targets priority policy objectives and the initiatives to achieve them, for the upcoming House of Representatives election.

For its 2012 manifesto, New Komeito highlights seven policy goals with the aim of rebuilding Japan. Among the key areas are: