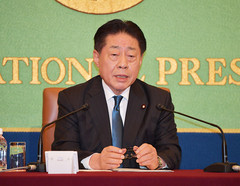 Kitagawa spoke on national security at the Japan National Press Club on Oct. 27

On October 27, Komeito Deputy Chief Representative Kazuo Kitagawa spoke at the Japan National Press Club on the rapidly evolving threat environment to the country. Noting that the balance of power has shifted dramatically since the 2010s, Kitagawa pointed to the Russian invasion of Ukraine as well as the growing military forces of North Korea and China, to conclude Japan “has no choice” but to enhance its defense preparedness.

Kitagawa called for a deeper examination of the viability of a ballistic missile defense system as well as on the need to have a counterstrike capability against long-range missile attacks against the homeland. On the other hand, Kitagawa urged the governments of Japan and China to set up confidence building protocols in order to avoid any accidental clashes, including those possibly occurring in the Taiwan Strait, saying that “how we choose to deal with … China is our greatest challenge.”