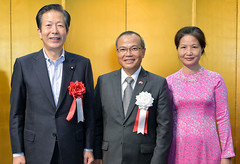 On September 2, Komeito Chief Representative Natsuo Yamaguchi met with His Excellency Vu Hong Nam, Ambassador Extraordinary and Plenipotentiary of the Socialist Republic of Viet Nam to Japan, at a concert commemorating the 77th anniversary of the Socialist Republic. The Komeito leader addressed the audience by citing the importance of securing safe passage of ships in Asia. He noted that the Japanese Maritime Safety Agency has been conducting a multilateral program to that end, which Vietnam has been a participant. He also said that Komeito is striving to forge stronger ties with Vietnam to celebrate the 50th anniversary of diplomatic relations in 2023.