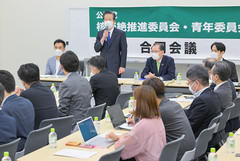 Yamaguchi at a party nuclear abolition session held on Jun. 9

Komeito Chief Representative Natsuo Yamaguchi spoke at his party’s committees for nuclear abolition and youth affairs, which held a joint session on June 9. The joint session was held to examine Japan’s role and contributions in ridding the world of nuclear weapons at a time when the possibility of the use of such arms is escalating.

Among the initiatives under examination was a proposal co-developed by Nagasaki University’s Atomic Bomb Disease Institute and Research Center for Nuclear Weapons Abolition (RECNA) and various Japanese NGOs. The proposal will be introduced at the 2022 Vienna Conference on the Humanitarian Impact of Nuclear Weapons on June 20 prior to the First Meeting of States Parties to the UN Treaty on the Prohibition of Nuclear Weapons held on June 21-23.

In his address, Yamaguchi described the Humanitarian Impact conference as “the perfect opportunity” to advance discussions on ways to abolish nuclear arms as Japan could provide actual experiences of people who survived the devastating effects of an atomic attack.