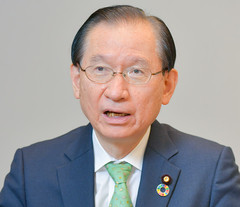 Komeito House of Councilors member Masayoshi Hamada chairs the party’s committee for the abolition of nuclear weapons. He recently returned from a series of meetings held in Austria, from a public forum held by the International Campaign to Abolish Nuclear Weapons (ICAN) and ICAN Austria on June 18-19 to the 2022 Vienna Conference on the Humanitarian Impact of Nuclear Weapons on June 20 and the First Meeting of States Parties to the UN Treaty on the Prohibition of Nuclear Weapons (TPNW) convened on June 21-23.

In a July 2 interview with the Komei Shimbun daily organ, Hamada cited the progress made at the TPNW’s first states’ meeting, including the adoption of an action plan that not only aims to expand the number of states-parties ratifying the treaty but, by setting up a Scientific Advisory Group, strengthen the credibility of its implementation process. He also noted that the action plan affirmed the TPNW’s complementarity with existing disarmament and non-proliferation regimes such as the Nuclear Non-Proliferation Treaty.

Another highlight of the action plan, said Hamada, was that it obliges states-parties to facilitate “international cooperation…and financial assistance” for victims of nuclear weapons and environmental remediation. This obligation, he explained, further underscores the importance of the hibakusha, or Japanese survivors of Hiroshima and Nagasaki, who offer real-life testimony of the horrors of an atomic attack, a point emphasized by Humanitarian Impact conference and the ICAN forum.