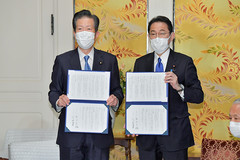 On October 1, Komeito Chief Representative Natsuo Yamaguchi met with his counterpart, Liberal Democratic Party President Fumio Kishida, with the two reaffirming the two-party agreement to partner in a coalition government. Kishida is expected to be voted in as prime minister at a joint session of the House of Representatives and House of Councilors held on October 4.

The heads of their respective political parties expressed a shared commitment in triumphing over the covid pandemic while directing additional government assistance to such realms as child-rearing and education, which have become a serious issue for parents who either have lost their jobs or seen their incomes pared.