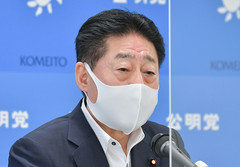 Kitagawa with reporters on Jun. 24

On June 24, Kazuo Kitagawa, Komeito’s deputy chief representative and its Central Secretariat chair, reiterated his party’s position that spouses should be allowed to retain their premarital names despite the latest Supreme Court ruling. The court ruled on June 23 that enforcing the existing requirement for married couples to adopt the family name of the male spouse was not unconstitutional.

Kitagawa scoffed at the argument that allowing separate names would undermine Japan’s family structure, saying that it would help further empower women in society. He added that Komeito would work on the Liberal Democratic Party to secure its coalition partner endorsement of a new, more inclusive marital system.