Komeito pushing for LGBT law during this Diet session 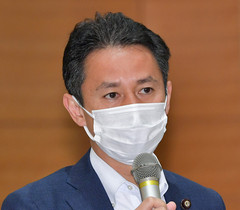 On May 31, a nonpartisan group of national legislators held a general meeting on passing a bill ensuring equal treatment for lesbians, gays, bisexuals and transgenders (LGBT) in Japan. The group’s secretary-general, Komeito House of Councilors member Masaaki Taniai, lamented that the national government lagged far behind local governments, which have already been adopting a system of legal partnerships to recognize sexual minority marriages. He said that the goal of the group was have a LGBT bill passed during the current session of the Diet.