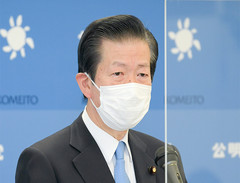 Yamaguchi spoke to reporters on hydrogen fuel on Apr. 6

Speaking to reporters on April 6, Komeito Chief Representative Natsuo Yamaguchi urged the government to use a ¥2 trillion fund established to facilitate Japan’s transition to a carbon neutral society to promote hydrogen energy. He said the government should seek help from leading experts in the private and public sectors as well as in academia to develop solutions promoting hydrogen and maximize its use to drive the nation’s international competitiveness in the realms of technology and industry.

Referring to climate change, Yamaguchi said that it was imperative for Japan and the United States to develop a common understanding regarding the criticality of the issue and emerge as co-leaders in resolving it.