Home / News / “Leaving no one behind” in a digitized society

“Leaving no one behind” in a digitized society 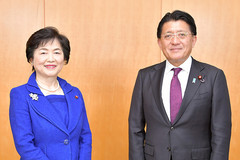 Michiyo Takagi, who heads a Komeito task force on digitalization, recently spoke with Takuya Hirai, minister of the newly formed digital agency established at the direction of Prime Minister Yoshihide Suga. The two discussed some of the major challenges and benefits of Japan’s push into a fully connected era.

Takagi raised several issues brought on by the pandemic, including the inability to use the Japanese-style social security number for the government’s payout of ¥100,000 per person as economic relief during the voluntary lockdown. She pointed out that Japanese bureaucracies at both the local and national levels remain far too reliant on legacy systems to fill out and process forms and other paperwork. Takagi then cited Komeito’s vision of a digital society, one that is as inclusive as it is friendly for all its constituents, regardless of age, disability or income.

Hirai agreed with many of Takagi’s points, acknowledging that while the nation boasted a superb communications infrastructure, it was not exploited to the fullest. He said that his job was to put into place a scheme, to be laid down and refined over the next two decades, that will propel Japan into one the most digitally accessible and effective countries in the world. He believes this upgrading process, which is likely to focus on use of mobile devices, will not only make governmental services more friendly but also improve their overall quality and responsiveness.