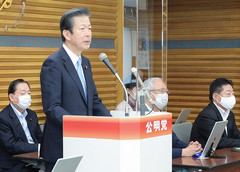 Natsuo Yamaguchi, who was reelected chief representative of Komeito on September 27, addressed its Central Secretariat on October 1 as to the near-term policy objectives of Komeito’s partnership in Japan’s coalition government. Among the two largest goals, he said, was to formulate a national budget by the end of 2020 and revise the tax code.

Yamaguchi also pointed out the need to reduce cellphone rates and extend coverage for fertility treatments under the national healthcare insurance program. He reiterated his party’s commitment to digitize essential government services, including medical care, caregiving for the elderly and disabled, education and housing. Although the new administration led by Prime Minister Yoshihide Suga will be establishing an agency to facilitate digitalization, Yamaguchi said Komeito will be working to ensure that any national system will be user-friendly, safe and trustworthy.