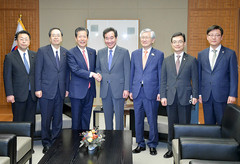 Yamaguchi shakes hands with Prime Minister Lee Nak-yeon before the meeting on Oct. 23

On October 23, Komeito Chief Representative Yamaguchi met with Prime Minister Lee Nak-yeon of South Korea, who was in Tokyo on the occasion of Emperor Naruhito’s ceremony of enthronement. The two have recognized that every effort must be made to improve bilateral relations, facilitate further dialogue and fortify ties oriented to the future rather than being dictated by the past.

Prime Minister Lee acknowledged that relations between South Korea and Japan were far from optimal and that it was imperative for steps to be taken as quickly as possible to improve the situation, with both governments exploring every avenue to do so. He cited Komeito for consistently playing an active role in bettering bilateral ties over the years and expressed his belief that the Japanese party must work harder now more than ever to that end.

Yamaguchi reiterated Komeito’s longstanding commitment to better relations with South Korea, saying those who preceded him had striven to expand exchange not merely at the political level but also in the realms of education and culture. He added that it was vital to build on this foundation rather than undermine what had been achieved in the past. To that end, he believed that the general conference of national legislators from the two countries to be held in November should serve as a forum to promote the exchange of candid opinions and insights to improve ties. The Japanese lawmaker also expressed his hope that Prime Minister Lee’s meeting with Prime Minister Abe Shinzo would provide an opportunity for continued dialogue.

The meeting was attended by Secretary-General Tetsuo Saito and Chairman of the House of Councilors Makoto Nishida of Komeito.