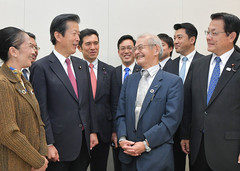 The Nobel laureate cited the work carried out by Drs. Kenichi Fukui and Hideki Shirakawa, who also won the chemistry prize in 1981 and 2000 respectively, as the basic research upon which he credits his success. He thus emphasized the need to expand Japan’s basic research base and enhance collaboration between industry and academia. He added that many scientists start to do research work that prove fruitful from around the age of 35, which is why he called on children to study hard and grow more capable for the day they can fully flex their abilities as adults.