Home / News / Even more regional exchanges between Japan and Russia

Even more regional exchanges between Japan and Russia 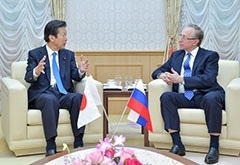 Representative Yamaguchi met with HE Ambassador Galuzin (right) on Oct. 11, at Komei Kaikan

On October 11, Komeito Chief Representative Natsuo Yamaguchi had a meeting with Russian Ambassador to Japan Mikhail Galuzin at Komei Kaikan in Shinjuku Ward, Tokyo, and agreed to cooperate for expanding the exchanges between regions aiming to further development of Japan-Russia relation. The meeting was attended by Lower House member Hidemichi Sato and Chair of International Affair Committee Masaaki Taniai.

In the meeting His Excellency Ambassador Galuzin, talking about the current status of the both countries’ relation including periodic Japan-Russia Foreign and Defense Ministerial Consultation (two-plus-two) and increased trade amount, showed his recognition that the relation was favorably progressing in every aspect.

Based on that, His Excellency emphasized his expectation for people’s exchanges to be activated even more, touching upon the year 2020 through 2021 which was designated as the “year for exchange of regions and sister cities” by both countries and the expansion of airlines between the cities in both countries.

Representative Yamaguchi, mentioning the importance of expanding the range of exchanges no only between the governments but also between regional and sister cities, strengthened the necessity to enhance mutual understanding in such as cultures and sports. His Excellency Ambassador Galuzin also introduced that now Vladivostok, the east end city of Russia, became accessible within about 2 hours with the direct flight from Tokyo and expected more tourists’ visit with each other.