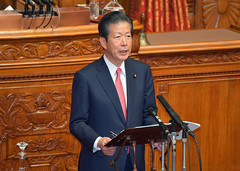 On October 9, representatives of each party posed questions to the general policy speech made by Prime Minister Shinzo Abe at the plenary session of the House of Councilors. Touching upon the result of the previous upper house election, Komeito Chief Representative Natsuo Yamaguchi emphasized that the government should receive the nation’s expectation for the strong initiatives against various issues we face in Japan with the stable political foundation and Komeito would move forward to realize policies that could lead to the elimination of anxiety and improvement of people’s lives in the future. He claimed that LDP-Komeito coalition government should firmly promote rebuilding of social welfare system corresponding to the 100-year life, establishment of disaster-resilient county and peaceful diplomacy based on dialogue and cooperation.

＝Outline of the questions and the answers of the government

Representative Yamaguchi visited China in August and Turkey in September as one of the party’s delegates and underlined even more profound exchanges between parties as the base of enhancing the relations between both countries onward. With regard to the Japan-China relation, he called for the necessity of enhancing it through leaders exchanges on a regular basis taking advantage of this timing in its recovery tone.

Prime Minister Abe showed his thought to expand the exchange among economic and youth circle in addition to the leaders’ exchanges, mentioning that he would pay tribute to the roles Komeito delegates had played for enhancing the Japan-China relations.

Touching upon the international convention slated to held in Japan to discuss measures against the climate change through innovation, Representative Yamaguchi appealed that Japan should take the lead for further initiatives.

Representative Yamaguchi urged to promote thorough verification on the issues curved out from the damages caused by No.15 typhoon and the heavy rain in the northern part of Kyushu and proceed measures to prevent recurrence while calling for all out efforts on the recovery and restoration from them. With regard to the installation of air conditioners in school gyms, he encouraged the actions by the government, emphasizing the obvious necessity considering many seniors and infants who would evacuate to such facilities at the disaster period.

As for the safety measures in the landslide hazard area (red zone), he also pointed out some locations remain unmentioned because of private properties. Minister of Land, Infrastructure, Transport and Tourism Kazuyoshi Akaba of Komeito responded to proceed examination for materializing (the measures) in the government as a whole.

Representative Yamaguchi, talking about the free public preschool education started in October, requested to examine proper handling and necessary support as the government from the user’s perspective in order for kindergarten-like facilities which are out of the scope of the program to enjoy the benefit from this free-of-charge system.

Prime Minister Abe responded that the government was examining the approach of support for such similar facilities in cooperation with local governments.

With regard to the reduced tax rate system of the consumption tax, Representative Yamaguchi argued that it was necessary to promote introduction of cahiers supporting the new system and establish a hotline structure for final tax return. He also called for the full preparation in order to give a sense of security to people’s lives. Prime Minister Abe answered that the government would proceed announcement for smooth implementation and familiarization of the system including the preparation for necessary structures.

Based on the completed deployment of air ambulance services in 44 prefectures, Representative Yamaguchi talked about the necessity of establishing the foundation that allows service providers to share their operational experiences and cooperate with each other following the completion of the service implementation in all prefectures, calling for the government to play its leading role for the initiative.

Prime Minister Abe showed his thought to support for information sharing as the government.