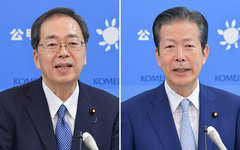 Komeito Chief Representative Natsuo Yamaguchi and Secretary General Tetsuo Saito spoke at a joint plenary session of party members from both Diet chambers on October 4. Yamaguchi, citing past policy achievements, reaffirmed the importance of Komeito’s partnership with Liberal Democratic Party in Japan’s coalition government while stating the paramount issue at present was passage of the Japan-US trade treaty. He also noted that tax reform and fiscal 2020 national budget were major challenges to be tackled in the months to come.

In his speech, Secretary General Saito reiterated Komeito’s midterm policy objectives, from the creation of an all-generation social security system to tuition-free child education, funded from revenue generated by the 10% hike in consumption tax. He also pointed to a major campaign in which party legislators at both the national and local levels met with one million constituents nationwide to tap what the general public was really thinking—with the party concluding that people felt most anxious about dementia. As a result, Komeito will be lobbying for the passage of a basic law to deal with the affliction, he said.

Next, Saito stated that disaster prevention, mitigation and reconstruction would be a Komeito priority following a succession of major typhoons and torrential rainfalls and flooding. He then said that the party would work to reach a broad consensus with other political parties to cut legislative expenses so that lawmakers will share in the consumption tax hit shouldered by ordinary citizens.