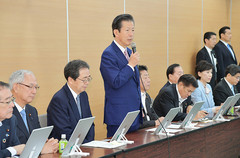 At Komeito’s Central Secretariat meeting held on October 3, Chief Representative Natsuo Yamaguchi spoke on the successful coalition government forged between the Liberal Democratic Party and Komeito over the past 20 years. He said the two political partners have been able to address critical issues at home and abroad by adopting a “big-picture” perspective, taking the needs of the nation to develop policies to overcome every challenge. Komeito, Yamaguchi said, was particularly proud of its role as the antenna and transmitter of the needs and wants of ordinary citizens whose voices are rarely heard by other political parties.

Yamaguchi also cited Ian Bremmer, a renowned researcher of international politics and founder-president of Eurasia Group, whom he spoke with the previous day, regarding Komeito’s role in keeping Japan from directly engaging in military conflict overseas. The party’s unwavering stand against never involving the nation in another war, the American researcher explained, was a major factor in ensuring the political stability of Japan and why he saw the LDP-Komeito partnership as a “model” for other industrialized democracies to follow.