Japan politically is “model of stability” 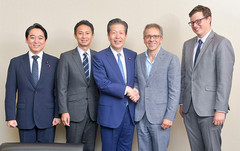 On October 2, Natsuo Yamaguchi, Komeito’s chief representative, met with Ian Bremmer, an authority on international politics and president of the US political risk research and consulting firm Eurasia Group, in Tokyo. In their meeting, Mr. Bremmer noted that Japanese politics is a “model of stability” and called for Komeito, with its primary emphasis on peacebuilding, to take the initiative in facilitating multilateral cooperation.

Founder of Eurasia in 1998, Mr. Bremmer coined the term “G-Zero,” predicting an era in which the larger G7 countries in the West would no longer possess the influence they wield today. He has also cited the coalition government in which the Liberal Democratic Party and Komeito have partnered as a major reason behind Japan’s political stability. In 2018, he co-chaired the GZERO Summit held in Japan with Japan Business Federation Chairman Hiroaki Nakanishi.

Among the reasons behind Japan’s consistent political stability that Mr. Bremmer raised were a largely intact middle class despite a contracting population and refusal to engage directly in military conflict, pointing to Komeito, given its pledge to never allow the nation to wage war again, as a major factor. Another reason, he said, was policy resilience, with the government tackling every domestic challenge, including devastating earthquakes and other natural disasters, with persistence.

The political scientist concluded that Japan should actively work in promoting acceptance of multilateralism, with Komeito embracing a leadership role in the effort.