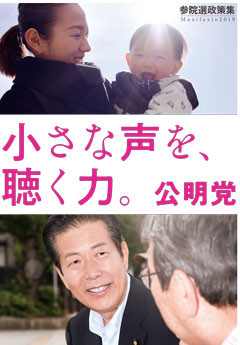 Ⅰ) Looking Inward for Parliamentary Reform
•Reduce legislator salary by 10%
With the consumption tax expected to increase to 10% from October 2019 and the heavy burden citizens must bear as a result, Komeito is striving to actively working to pare the salaries of lawmakers by 10% as an expression of solidarity and commitment to their public service.

Ⅱ) Revitalizing the Economy for Sustainable Social Services
•Shifting to a social security net to benefit all generations
As Japan enters an era in which a large demographic segment will be able to live comfortably to 100 years of age, the nation must improve upon the way its social security system—which ranks among the best in the world—in a major way. Which is why the transition to an all-generation social security model that services the needs of everone from infants and adults and the elderly is imperative.
Among the key Komeito policies are:
・Providing free education at three basic levels of schooling, alleviating the cost burden on parents
・Raising the minimum wage nationwide and lay an infrastructure in which small- and medium-sized enterprises (SMEs) can pay higher salaries, thereby boosting local economies
・Implementing a system allowing employees to take paid holidays by the hour
・Revising pension systems that currently penalize workers from employment beyond their retirement age and expand the adoption of income-related pensions for employees
・Paying out an additional 5,000 yen to low-income pensioners while concurrently reducing their nursing care insurance premiums
・To ease the expected the consumption tax hike hit, institute a lower tax rate on selected products and services, distribute premium gift certificates, reward points for cashless payments and other measures

Ⅲ) A society that inspires genuine hope for the elderly
•Instituting new mobility services
Japan remains faced with the stark reality of a society that is rapidly aging as its birthrate declines. The need to establish an environment in which the elderly and the challenged may move about safely and securely is dire. In order to enhance and elevate their quality of life, Komeito is committed to building such an environment under the aegis of a national initiative.
・Enabling senior citizens and the challenged safe, convenient modes of transportation as part of adopting new mobility services
・Accelerating barrier-free facilities and public transportation at the local community level, allowing for the elderly to continue residing in neighborhoods they feel most comfortable
・Supporting care and rehabilitation programs for people suffering from various degrees of dementia, while stepping up research to prevent the afflication; significantly expand the R&D budget to produce causal therapeutic agents

Ⅳ) Maximizing Prospects for Survival and Recovery
• Prioritize disaster prevention, mitigation and reconstruction
Having lived through a succession of natural and manmade catastrophes in recent years, Komeito believes that many of the harsh lessons learned from the experiences must be properly directed to raise public awareness to prevent disasters, mitigate their impact and expedite the rebuilding process.
・Reinforcing each region’s capacity to respond to disasters
・Adopting disaster awareness initiatives by distributing local disaster response manuals and other measures
・Recovering from major disasters and complete the ensuing rebuilding effort