Home / News / Severing the cycle of poverty for university-bound students

Severing the cycle of poverty for university-bound students 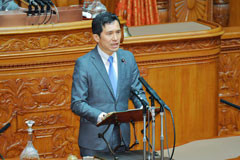 Niizuma at the plenary session of the House of Councilors on Apr. 19

On April 19, the House of Councillors began deliberation on a bill enabling students from low-income households access to free higher education—universities or their equivalent—from April 2020. Komeito’s Hideki Niizuma stood to question Masahiko Shibayama, Minister of Education, Culture, Sports, Science and Technology, on the government’s position on the bill.

Komeito is the bill’s principal agent, having lobbied to expand the eligible scope and amount of scholarship applicants for outright grants as well as to either reduce or exempt tuition for low-income students. Under the bill, the maximum scholarship to be provided is some 910,000 yen annually (for a student at private university living alone) and maximum tuition reduction or exemption is some 700,000 yen per year (for private universities). Students coming from households exempted from the resident tax or its equivalent will be eligible.

Niizuma said the bill, when passed, will redress the “education gap” created for low-income families while helping to remove an embedded inequality and sever the vicious cycle of poverty. Noting that the bill focuses on low-income families, the Komeito legislator inquired whether middle-income families with multiple dependents are also under consideration. To this, education minister Shibayama replied that the situation will be examined after analyzing usage data on student loans.

As to the need for students on scholarship to maintain a minimum level of grades, Niizuma stated that those students must be fully informed of the details of the requirement in advance and for those who were warned that they were not maintaining their grades to be provided with considerate guidance.