Home / News / Stay on the path toward peace treaty

Stay on the path toward peace treaty 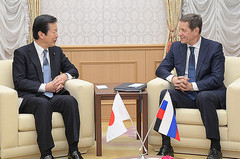 On December 21, Komeito Chief Representative Natsuo Yamaguchi met with Aleksandr Zhukov, First Deputy Chairman of Russia’s State Duma, at the party headquarters in Shinjuku Ward, Tokyo. They exchanged ideas and insights for the further development and strengthening of diplomatic relations between Japan and Russia.

In the meeting, Yamaguchi, noting that bilateral ties were going well, called for the two governments to seize the opportunity to conclude a peace treaty formally renouncing the state of war between the countries that has carried on since the end of World War II. He also urged that Japan and Russia do so not only by relying on executive and diplomatic channels, but also through legislative efforts as well, expressing his desire to step up exchanges between parliamentarians.

First Deputy Chairman Zhukov concurred with Yamaguchi on the need to sign a peace treaty and stated his hope to strengthen bilateral ties across a wide range of realms, from the economy to culture and the arts.