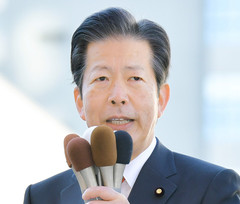 Komeito Chief Representative Natsuo Yamaguchi opened 2018 with a series of outdoor addresses around the nation. Among the areas he touched on were Komeito’s policy successes in infant and high school education as well as top party officials visiting Russia, South Korea and China in pursuit of a peaceful resolution of such regional issues as the North Korea nuclear weapons and ballistic missile programs.

He also pointed to Japan’s coalition government, in which Komeito is partnered with the Liberal Democratic Party, noting that its economic policies have yielded impressive dividends in terms of higher employee wages and lower unemployment rate. Komeito, Yamaguchi pledged, remains committed to sustainable economic growth heading toward 2020 and the Tokyo Olympiad and Paralympics to be held that year.