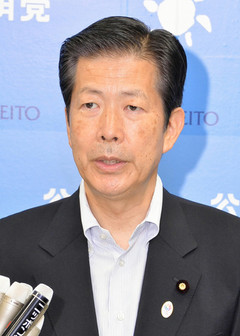 Yamaguchi said the prime minister’s use of “aggression,” “colonial rule,” “deep repentance” and “heartfelt apology” reaffirmed and carried forward past Japanese administrations’ position on the war. He added that the Abe Cabinet’s adoption of the statement was equally significant.

The Komeito leader noted that Abe further laid out in clear terms Japan’s continued commitment to renounce war and to define the path of peace upon which the nation will traverse going forward. He also said that Abe was far more specific than previous government statements as to the tolerance and support extended by other countries, including China, in Japan’s postwar reconstruction and return to the international community as a peace-loving country.

Yamaguchi explained that Komeito had pressed the prime minister to use his statement and press conference to express the Japanese government’s willingness to improve ties with China and South Korea. Yamaguchi said he believed that intent was properly communicated and that Komeito would continue supporting Japanese overtures to amend relations with its two Asian neighbors.