Appreciation for Landmine Removal in Vietnam 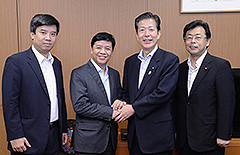 Yamaguchi welcomed Ambassador Cuong to Japan and shared his expectation for further economic cooperation between the two countries while expressing interest in strengthening ties in the field of education, culture and tourism. Yamaguchi visited Vietnam in 1991 and successfully worked for the removal of landmines there.

Ambassador Cuong expressed his gratitude for Komeito’s effort in realizing the removal program and said that Japan is the most important partner for Vietnam its the economic development. He expressed his wish to strengthen bilateral ties as well as ties between Japan and other ASEAN countries.