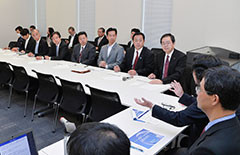 October 23, 2013: A New Komeito task force on countermeasures for the disaster at Fukushima No. 1 Nuclear Power Plant met on Tuesday, October 22, to discuss the use of converted crude-oil supertankers to store radioactive water pumped out from the crippled reactors.

The guest speaker, Yasunori Kobatake, the executive corporate officer of Tsuneishi Shipbuilding Co., Ltd., pointed out that it was possible to store the contaminated water for long periods of time, noting that double-hulled tankers has never suffered leakage or spills and were particularly resistant to typhoons, tsunamis and temblors. He also said that it would take 750 days—some two years—to fill a 300,000-ton supertanker if the runoff continued at its current pace of 400 tons a day at Fukushima.