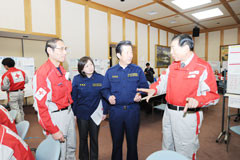 March 19: New Komeito donated \100 million to the Japanese Red Cross Society (JRCS) on Friday, March 18. The money was raised from a special relief fund the party established on March 14 to aid victims of the massive earthquake and tsunami that devastated northeastern Japan on March 11.

More than 8,000 donors from around the country contributed to the fund in the first four days of its establishment. New Komeito will continue making donations to the society in \100 million increments.