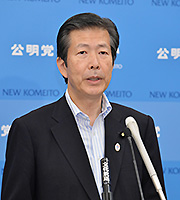 July 2, 2014: Natsuo Yamaguchi, chief representative of New Komei Party, has commented on the cabinet decision regarding the concept of the new security legislation, at a press conference on July 1st.

The cabinet decision is highly significant in terms of responding to the changed security environment in which Japan finds itself, protecting the lives and peaceful livelihoods of its citizens, and clarifying the direction for legislative measures to ensure seamless security responses.

Most important was the fact that the principle of pacifism that is at the heart of the Constitution has been firmly maintained and the limits of defensive measures permitted under Article 9 of the Constitution have been clarified. Any use of force must be for the defense of Japan; that is, use of force is permitted as a last-resort defensive measure to ensure the national survival of Japan and protect its people. There has been no change to Japan’s exclusively defensive security policy, which will be faithfully upheld going into the future.

Following the release of the report from the Advisory Panel on the Reconstruction of the Legal Basis for Security on May 15 of this year, New Komeito urged that any measures taken be restrained and based on the interpretations of the constitution that successive governments have upheld for decades. In response to our request, Prime Minister Shinzo Abe, in providing a framework for the ruling coalition’s deliberations, indicated that he considered it important that any new interpretation be logically consistent with past government interpretations. Further, and equally important, he rejected the idea that the use of force for self-defense is not prohibited under international law, irrespective of whether this is for individual or collective self-defense, and that constitutional limitations do not apply to measures deemed legal under international law, such as United Nations collective security measures.

In concrete terms, three conditions were established limiting the use of force as a defensive measure: that armed attack against a foreign country with which Japan has a close relationship occurs and that, as a result, there is a clear danger that Japan’s national survival will be threatened and its citizens’ right to life, liberty and the pursuit of happiness be fundamentally undermined; and that there are no other appropriate means available to protect Japan’s people. Together, these conditions serve as strict restraints on the use of force.

The inclusion of the words “clear danger” provides the basis for objective, rational judgments, preventing the government from making arbitrary determinations that the use of force is justified. This is an extremely important point.

So-called collective self-defense, in which the purpose is to defend another country, is not recognized now nor in the future. The Constitution limits the use of defensive measures solely to the defense of Japan. The core normative value of the Constitution has been secured because Constitutional restraints have been applied, such that the [right to self-defense] can only be invoked in cases that are virtually indistinguishable from cases of individual national self-defense.

Looking ahead, through Diet deliberations and other vehicles, we are determined to fulfill our responsibility to explain these issues in such a manner as to gain the understanding of the Japanese public. Along with enhancing deterrence, enhancing diplomatic capacity is one of the key pillarsof the cabinet decision. As a party, we are determined to exert ourselves to the fullest in this effort.

(Regarding concerns that the public doesn’t support the measure): Gaining the understanding of the Japanese public is extremely important. The Cabinet Decision clarifies the thinking of the government. Over the course of the legislative process and through other venues, we will continue our efforts to gain the understanding and support of the people.

(Regarding efforts to encourage the understanding of international society): The Cabinet Decision makes clear the importance of diplomatic activities, so there is a need to accurately convey the thinking underlying the decision widely to the nations of the world. In our capacity as members of the ruling coalition, we will work to fulfill that obligation.

(Regarding New Komeito’s commitment to peace): The Cabinet Decision fully maintains the basic directionality of Japan as a nation of peace. I consider this to be the outcome of the party’s long-standing traditions. In order to realize the core goals of securing lives and peaceful livelihoods of the people of Japan, we wish to encourage policies that will further the national good, such as wide-ranging humanitarian and peace-related activities.

(Regarding the role of New Komeito within the ruling coalition): I feel that this process of debate and deliberation has demonstrated the raison d’être of New Komeito. At the same time, there are a number of priority policies that must be grappled with by the ruling coalition, including economic renewal, disaster recovery and comprehensive reform of the tax and social security systems. I don’t think our role within the coalition will be diminished.