Home / Policies / Achievements / where we stand / Kitagawa: Debate on collective self-defense must be ‘thorough and lengthy’

Kitagawa: Debate on collective self-defense must be ‘thorough and lengthy’ 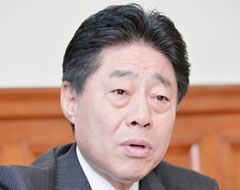 May 17, 2014: In an interview with Komei Shimbun, the party daily organ, New Komeito Deputy Chief Representative Kazuo Kitagawa addressed a press conference held by Prime Minister Shinzo Abe in which he aired his views on collective self-defense following a report by an advisory panel on the issue. Abe called on the two partners in Japan’s coalition government, the Liberal Democratic Party and New Komeito, to begin discussions regarding the direction and development of relevant legislation.

In his interview, Kitagawa identified three core areas as to the prime minister’s views. The first was the need to examine developing new legislation that would enable the government to protect the lives of Japanese citizens that is consistent with the current interpretation of the constitution. One example Abe cited was measures taken if an armed group takes control over an island under Japanese sovereignty that fall short of a full-scale military response, or what is known as “gray zone” scenarios. Kitagawa said such a scenario does not correspond to the exercise of the right to collective self-defense.

The second area is Abe’s clear rejection of his advisory panel’s recognition of Japan’s constitutional right, granted under international law, to participate in a United Nations collective security operation. While the panel report held that the exercise of force for self-defense was not barred under the constitution whether that right was exercised for individual or collective self-defense, the prime minister categorically declared that Japan’s Self-Defense Forces (SDF) will would never take part in such actions as the Gulf and Iraq wars in which the SDF would act as an armed combatant. Kitagawa said his party found this position as acceptable and noteworthy in that it definitively clarified Abe’s stand on the issue.

The third area concerns the limited exercise of the right to collective self-defense in the event that the safety of Japan could be adversely impacted. Prime Minister Abe said the government would examine the scope in greater detail in the coming weeks.

Kitagawa said New Komeito would take part in discussions with the LDP regarding the first, “gray zone,” area that does not pertain to the right of collective self-defense. They would then exchange views on expanding the scope of Japan’s participation in UN peacekeeping operations, and likely discuss the limited exercise of the right to collective self-defense last.

Kitagawa said most of the scenarios related to the “gray zone” contingencies are essentially police actions and are unrelated to the use of military force, and thus have no bearing on the discussion of collective self-defense.

As to Prime Minister Abe’s hypothetical case whether Japanese SDF soldiers should not be prohibited from protecting civilian noncombatants or NGO teams under attack at locations some distance away from SDF units deployed on humanitarian relief missions, Kitagawa said it was vital to separate UN peacekeeping operations and such multinational campaigns as that seen in the first Gulf War. He noted that the SDF troops were only dispatched to Iraq after a ceasefire agreement had been reached and with the consent of the disputing countries. “We can deal with the issue of SDF protecting civilians without going into the issue of the right to collective self-defense,” said Kitagawa.

As to Abe’s third point, Kitagawa questioned whether there was a clear security need to permit the exercise of collective self-defense by going so far as to revamp the position barring such action taken by successive governments over the years. And because any move to change this long-held stand would require a reinterpretation of Article 9 of the Japanese constitution, it must have logical consistency with past legal precedence. He warned that any government, when voted into office, should not be allowed to redefine of the right to exercise collective self-defense whenever it felt it was necessary, otherwise the legality of its definition would be undermined.

Kitagawa noted discussions between the two ruling coalition partners should first address concrete and realistic cases. If, hypothetically, such scenarios require a specific response, then he emphasized that it must be made within the parameters of the current constitutional interpretation. “We are of the opinion that a considerable number of cases can be dealt with under the right to individual self-defense or as a matter of law enforcement,” he said.

Moreover, Kitagawa sought clarification on the criteria for the limited exercise of collective self-defense. In the case of Japan’s right to individual self-defense, the minimum requirement is “imminent and illegitimate act of aggression” against the nation. Yet, if the right to collective self-defense is exercised, regardless of how “limited” it may be, it permits the use of force—meaning without specific rules of engagement, such limits would quickly become moot.

The advisory panel’s report states that limited exercise of collective self-defense is permissible “if such a situation could pose a serious impact on the security of Japan.” “This is too ambiguous as a requirement,” said Kitagawa.

While New Komeito has agreed to engage in discussions on the issue, Kitagawa expects the process to be as thorough as it is lengthy. “We need to clarify all these points and, above all, secure public approval first,” he concluded.