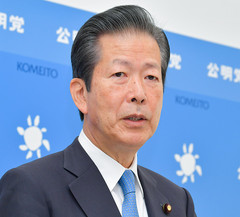 Yamaguchi spoke with press on Nov. 5

On November 5, Komeito Chief Representative Natsuo Yamaguchi met with the press, expressing disappointment that the United States government has withdrawn from the 2015 Paris climate agreement. He said that global warming and climate change were “scientifically validated phenomena” and necessitate international cooperation to redress. He noted that Japan was already suffering from the effects of global meteorological instability after being battered in recent months by super-typhoons and torrential flooding. He called on the Japanese government to take a leadership role in launching initiatives both domestically and internationally to combat the phenomena.

Yamaguchi also touched on the meeting between Japanese Prime Minister Shinzo Abe and South Korean President Moon Jae-in, both of whom were in Bangkok, Thailand this month to attend an expanded summit of Association of Southeast Asian Nations that included leaders of China, Japan and South Korea. Yamaguchi said both nations must make “every possible effort” to engage in dialogue to resolve outstanding issues, regardless of the duration of such talks. He added that the two parties should take advantage of a possible year-end summit among the three top Japanese, South Korean and Chinese leaders that China is currently exploring.